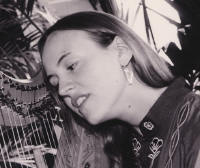 Harriet was classically trained, and has given many solo harp recitals around the world, for example at the ‘Irish Soirits’ festival in Germany; in Florida, Boston and New York in 2002 & 2003. She has also given concerts in Amsterdam, France and Belgium. She was the ‘Harper of All Britain’ in 2000 and has won it again in 2002. She plays both Concert or Celtic Harp.