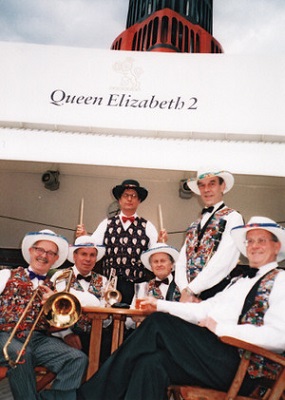 Parties, weddings, cruises and conferences. This band plays stylish, good-time music from the 1920s Jazz Age through to the 1980s, with vocals, for listening or dancing. No venue is too small or too large for them: intimate dinners or large marquee events, indoor or outdoors. They have a small strolling players option within the band and the fantastic pianist can play tasteful, background cocktail music for drinks or dining. Evening Dress, blazers and boaters or bow ties and jazzy waistcoats, the choice is yours, but their aim is certainly to make things go with a swing! The band play with a 4 to 7 piece line up.

The Band have an extensive Corporate client list. Venues include the acclaimed River Ouse cruises of Yorkboat, and most of the major hotels and country houses in the region - the Bugthorpe Estate of the Earl of Halifax, Ripley Castle, Rudding Park Allerton Park, The Star Inn (Harome), Wood Hall Hotel (Wetherby), the Swallow St George (Harrogate), Chetham's College (Manchester), the Scarborough Spa Complex and the Merchant Adventurers Hall, York.

Jazz from the 1920s through to the 1980s, with vocals, for listening or dancing. With the turn of the new Millenium, the band has broadened its base to include a wide variety of music for all kinds of functions. The six piece band's repertoire also covers
Rat Pack Swing, Glenn Miller, Latin American and a bit of Rock `n` Roll in addition to Trad/Dixieland

The band offer a range of options and instruments ranging from a three piece to seven piece band.