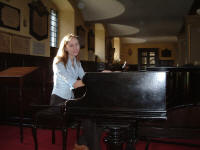 The flute/voice and piano duo of Andrew and Rachael has grown from years of friendship which started when they were still at school. Since then they have both developed into accomplished musicians in their own fields. These skills combine to form a fresh and versatile duo. The combinations of flute and piano, voice and piano or any of these instruments alone ensures a duo that can perform not only their inherent repertoire but arrangements of almost any music.

Andrew (flute / baritone voice) obtained a first class honours degree in music from the City University London whilst studying the flute concurrently at the Guildhall School of Music and Drama. He has performed extensively in London and the South East as an orchestral and chamber musician as well as winning competitions to perform concerti and being invited to appear as a guest soloist.

Rachael (piano) studied at the Royal College of Music Junior Department with John Barstow, and subsequently was awarded a scholarship by the College to continue as an undergraduate. While at College she performed as a solo and chamber musician at many prestigious venues in and around London including the studios at the Royal Opera House, Bolivar Hall, Bush Hall and Cambridge University.

The Duo are confident in any genre; their repertoire covers classical, jazz, pop and show. It includes popular wedding music and a more general selection.