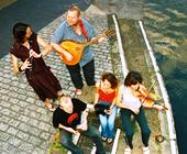 Based on an Irish Ceilidh Band, they can also include American Bluegrass and Scottish if desired. The Ceili band have been entertaining people in and around London since the early 90s. They were first heard in the capital's thriving Irish pub circuit in venues such as The Swan at Stockwell, The Fiddlers Elbow and Biddy Mulligans as well as in live performances transmitted on BBC Radio. They now appear more often in larger venues, performing regularly in The National Theatre, The Royal Festival Hall and Hammersmith Irish Centre.

Essentially a traditional Irish band, this group play an exciting mixture of original material and their own interpretations of traditional Irish tunes. Their set also includes songs from both sides of the Atlantic.

The current Line-up consists of Dave on guitar /bouzouki/ cittern/ mandolin/ banjo/ dobro/ vocals: Teresa on Fiddle/ mandolin/ vocals: Andrea on concertina plus caller. A larger band is also available with the addition of Alice on flute.
Music samples are of the larger band.

The spirit of the band has always been, and remains grounded in Traditional Irish Music but there are also influences from other traditions including Scottish and American Bluegrass which are evident in their arrangements and original compositions.