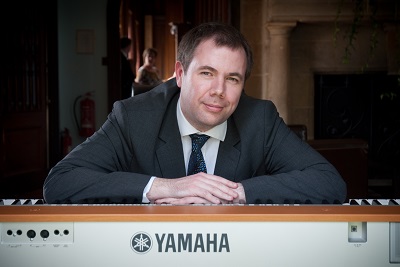 Simon has played at prestigious venues such as Royal Festival Hall (solo concerto), the Dorchester and the Ritz Hotel, London, as well as UK national radio broadcasts. His Versatile repertoire covers everything from Bollywood to Broadway, and your Classics, Classical and Modern Hits. He is available to take requests - your music for your day, no set lists here! Fully self-contained with a Yamaha stage piano if required.

Blessed with perfect pitch and able to play the piano since the age of five, Simon gave his first solo recital at age 13, and his prodigious talent and hard work helped him blossom into the versatile and fluent piano performer he is today. Simon trained at the Royal Academy of Music and spent 18 years recording some of the world's greatest musicians for BBC Radio. As a result, he has a library of over 2,000 songs and the ability to play pretty much anything at the drop of a hat..

Simon delights in putting the same time and energy into your wedding and event as he would into his own; working with you or to your brief to provide exactly the right mix of music for your day. Simon has played at some of the most prestigious venues across the country, and Europe, including an annual date with the Prime Minister at Chequers. A hugely versatile pianist who takes a delight in everything he plays.