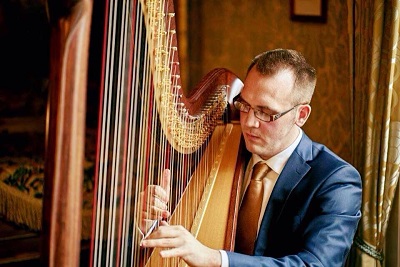 One of Britain’s leading young harpists in demand internationally, Llywelyn has a wide variety of experience catering to many different types of special occasions from corporate functions to weddings, anniversary milestones, birthday parties and can add a poignant touch to a funeral. Having studied a whole range of different repertoire he can offer multiple genres such as Traditional Welsh music or other folk music. He can also offer a Classical repertoire alongside Jazz standards and even current popular music. He works closely with a flautist and a soprano singer therefore can offer a Harp and Flute duo and a Harp and Voice duo. As a member of the National Youth Orchestra of Wales, Llywelyn was chosen to perform with the BBC National Orchestra of Wales in the BBC Proms as part of their ‘side by side’ scheme and has performed with Sinfonia Cymru, the Cory Band and at the Ungdomssymfonikerne. Also, during a placement scheme at the RWCMD, he has performed alongside the Orchestra of the Welsh National Opera. He has performed for a variety of audiences and events including various Music clubs across the U.K. He performed for the Diamond Jubilee celebration of HRH Queen Elizabeth II and celebratory Wales Rugby Union events on numerous accounts. Other sporting events include hospitality engagements with the Football Association of Wales and the London 2012 Wales Olympic launch. In April 2014 Llywelyn was chosen for the late Yehudi Menuhin’s Live Music Now scheme both as a soloist and in a duo with the soprano Jessica Robinson with whom he performed as part of the outreach programme at the Fishguard International Music Festival. The scheme has taken him to perform in many venues across Wales, Austria and Germany.