Classical Pianists: England - for your Event

Elly is one half of the SB Duo. As a duo they have a diverse jazz and classical repertoire, which is reflected the solo piano repertoire.

Elly will be happy to provide entertainment for your wedding ceremony, reception, party, or any of those special occasions, either using her own electric piano, or using the venue's piano if they have a good instrument. A Classical Pianist will add a touch of class to your event in England.

The links to music and repertoire are of the SB Duo, where you can hear the piano playing with flute or saxophone. The repertoire list ... more

Robert is experienced in providing pleasant, unobtrusive easy listening background music at weddings or functions and is available for dates throughout the year. A Classical Pianist to create a perfect atmosphere for your England wedding or anniversary.

He has worked on many cruise ships with Royal Caribbean and P & O Cruises; worked with stars such as Sandy Powell, Ken Platt, Frankie Howard, Cardew Robinson, Peter Goodwright, Ken Goodwin and Frankie Vaughn, to name but a few; appeared in many television shows including "Crown Court," "Emmerdale," "Coronation Street, "Peak Pract ... more 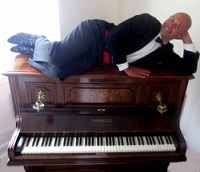 Pete is a brilliant pianist who can play a fabulous selection of both classical music and classical arrangements of a wide variety of popular pieces including Jazz standards, Rat pack and music from the 50s and 60s by famous and loved composers. England is within this Classical Pianist’s local performance area.

Stuart is experienced in playing for all types of function including weddings, parties, garden parties, anniversaries, corporate events, restaurants and themed nights. He has an extensive repertoire to suit all tastes and is only too happy to advise and discuss with you to ensure you have the music you want for each part of your special event. An ideal Classical Pianist for a wedding or dinner in England.

Jamie is a versatile and experienced pianist - comfortable playing classical, jazz and pop styles. He has performed at many functions from weddings, business events to small parties. He has had residencies at top London Hotels and restaurants including Park Lane, The Landmark, Quaglinos.

Jamie studied jazz piano at Leeds music college as well as gaining a music degree from York University. A Classical Pianist will add a touch of class to your event in England. He then gained experience working both as a session musician as well as releasing his own music throug ... more 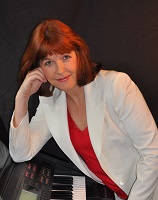 This pianist literally has an orchestra at her fingertips, in the shape of her Stagea - a rare Japanese instrument in an organ format with which she produces rich orchestral sounds played with both hands and feet. A Classical Pianist to create a perfect atmosphere for your England wedding or anniversary. Her programmes range from purely classical through light classics to 'lollipops' and have delighted audiences in the UK and Europe as well as on BBC National and local Radio and Classic FM.

She supports her programme with large screen video showing close-ups of her hands and also a ... more

With a repertoire including jazz standards, classic pop, classical and bebop; Yul is expert at creating background mood for quiet cocktails, guiding the bride down the aisle or being the centrepiece of your entertainment.

If no piano is available at your venue a digital piano can be provided for a competitive hire charge.

Kat is a pianist with training at the National Conservatoire in Athens, Greece and further studies at the Royal Academy of Music in London.

Kat is available for private events (parties, weddings, corporate functions and other social occasions), studio and live sessions, vocal accompaniment for exams and recitals and of course, private tuition. An ideal Classical Pianist for a wedding or dinner in England. She has experience with a vast range of genres and styles and can tailor her performances to suit your specific needs.

Do you enjoy the music of the sixties and seventies, mixed with a bit of rock and roll, and the classic party singalongs? If you do, why don't you let Roger provide the music for your event, including requests, and he'll get party started!. A Classical Pianist will add a touch of class to your event in England.

For all your cocktail and dining music played on the grand piano, including movie themes and show tunes, popular classics from all the decades, using original arrangements, relax with the sounds and versatility of Roger - a professional pianist and vocali ... more

Peter is a full-time professional wedding and events pianist, living and work in The Lake District – but also travel widely throughout the UK for weddings and events of all kinds: Civil Wedding Ceremonies, Wedding Drinks Receptions, Wedding Breakfasts, Engagement Parties, Product Launches, Dinner Parties, Corporate Events and anything else worth celebrating in style. A Classical Pianist to create a perfect atmosphere for your England wedding or anniversary.

If the venue where you are holding your event or marriage does not have an acoustic or digital piano, please don’t worry. ... more

Paul is a pianist based in the Northwest, who provides background music for weddings, Civil Ceremonies corporate events and private parties. England is within this Classical Pianist’s local performance area. Paul is always happy to discuss any special song requests you may have. For weddings you may choose from a range of packages that will provide you with music for any combination of either the Ceremony , Drinks Reception or Wedding Breakfast. For parties and corporate events he is happy to tailor his playing time to suit your budget. He also has ... more

The Classical Pianist lists musicians who are available to perform in England. They are particularly appropriate for the wedding breakfasts, dinners and evening entertainment. To find out more about them, read on:

England became a unified state during the 10th century and takes its name from the Angles, one of a number of Germanic tribes who settled in the territory during the 5th and 6th centuries. The capital of England is London, which is the largest urban area in Great Britain, and the largest urban zone in the European Union by most, but not all, measures.

England ranks amongst the world's most influential and far-reaching centres of cultural development. It is the place of origin of both the English language and the Church of England, and English law forms the basis of the legal systems of many countries; in addition, London was the centre of the British Empire, and the country was the birthplace of the Industrial Revolution.