Harps - for your Event

To see available Harps
select your County or Location

The Harp pages lists musicians who are available to perform in your area. They are particularly appropriate for the wedding breakfasts, dinners and evening entertainment. To find out more about them, read on:

Most of the harpists on this website play the 'Pedal Harp' or 'Concert Harp'. Harps in simple form go back to ancient Egypt, and small Celtic harps are a part of the tradition of Irish and Welsh music (You can find Celtic harp players in the Ceilidh: Barn Dance: Folk section of our website, accessible from the home page.). But the concert harp is a relatively modern instrument that came into its present form in the 19th century and is designed primarily for classical music, either as a solo instrument or as part of an small ensemble, (see the Classical Duos & Trios section or our site, where there a number of harp plus other instrument duos), or large orchestra, where it can produce enough volume to hold its own in an orchestral setting. There must be a connection between the traditional harps of Wales and Ireland and harpists, because a surprising percentage of classical harp players are Welsh or Irish in origin.

Just because it has been developed as a classical instrument, doesn't mean that the music is restricted to the style. Here is just a taste of the range of music that a harpist might play, which would cover the popular wedding songs and music to cover just about every occasion:

All harpists have their own repertoire, so check out the examples each gives on their website entry. 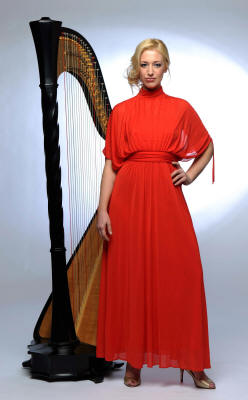 Although an acoustic instrument that generally performs without amplification, it can produce a significant volume, so can hold its own against background chatter at wedding receptions or formal dinners and other functions. (Of course, no instrument can compete with a large number of guests who are in the mood to challenge each other to a 'who can out talk everyone else' contest!)

The harp is also a particularly visual instrument. It is an object of great beauty in itself, and in conjunction with the harpist is can serve as a visual focal point to an event as well as a musical delight. There is something unexplainably magical about the whole combination of aesthetic form and music. So give thought to where you will site the harpist for best effect, whether they are playing classical wedding music or music from the shows during the wedding reception or a banquet.

One limitation of the harp is that it is not quick to move. It is effectively the inside of a piano stood vertically, so it is a lot of instrument. It is also almost a piece of antique furniture, so is as vulnerable to damage as a Chippendale table and with similar high value; (indeed, if the harpist is playing in a stately home type wedding venue, consider positioning the harpist adjacent to some beautiful antique furniture or sculpture, to give an even more enhanced effect.)  So, unlike a string quartet or other acoustic ensemble, the harp can not be lugged up flights of stairs into a musicians gallery, moved from room to room in a few moments to follow the guests, or be taken outside to play. (Some harpists will, others won't take their instruments outdoors. They will always want guaranteed shelter, such as an open sided building or gazebo. Specify on your booking form if you do want them to play outdoors, weather permitting). Harpists are less common as entertainment for parties, but that really depends on your taste in music and style.

Plan where the harpist will play plus any moves you may want. Have them play in only one location if possible, and minimise the number of times they have to move if they need to, giving them time to wrap the harp in its protective coat, load it on to its removal hand trolley, then unload and set up at the other location.

Another consideration is cost. Don't go for a harpist because you think, being only one musician, it is a cheap option. Because of the rarity of good harpists, and the cost of the instrument and difficulty of transporting it, a harpist will cost you almost as much as a string quartet or string trio. Hire a harpist because that is the music you enjoy.

Harpists are a favourite for church weddings, civil partnerships, corporate events, recitals, banquets. In fact anywhere where music and impact of the beautiful looking instrument itself are important.  Harpists are popular for state functions, and some of the harpists on our website have perform for dignitaries including HM The Queen, HRH Duke of Edinburgh, The Lord Chancellor and numerous Heads of State. Corporate event planners will often book a harpist because of the sense of 'style' it lends to an event. They are also very compact instruments, so can fit into a small space.