Jazz Quartets - for your Event

To see available Jazz Quartets
select your County or Location

The Jazz Quartet pages list bands that are available to perform in your area. They are particularly appropriate for wedding receptions and parties. To find out more about them, read on: 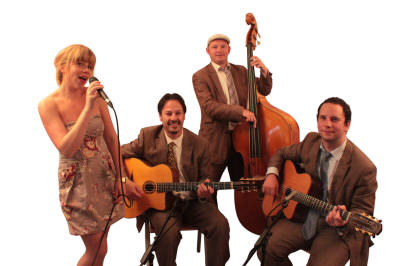 A Jazz Quartet, rather like a classical String Quartet, is musically the perfect ensemble, with instruments to provide a full harmony. Bigger bands can produce a more lush and complex harmony, smaller bands a more direct feel, but the Jazz Quartet is often considered to provide the most balance.

A jazz quartet can create a fantastic atmosphere during the drinks reception. But remember that most bands have a PA system, so can’t move location and follow guests outside for photographs as a string quartet (without a PA system) can do. More typically the jazz band would perform for the evening celebration at your wedding in your area. However, a jazz quartet can equally well form the entertainment for the drinks reception at your wedding, possibly setting up outdoors in a gazebo in the summer.

Outdoor performance of a Jazz Quartet

In the warmer months of the year it may be practical for the Jazz Quartet to play outdoors at your fund raising event, race meeting or wedding reception. Be mindful that the weather is unpredictable in the UK. You might hope to have a fine day for your event in your area, and it may even 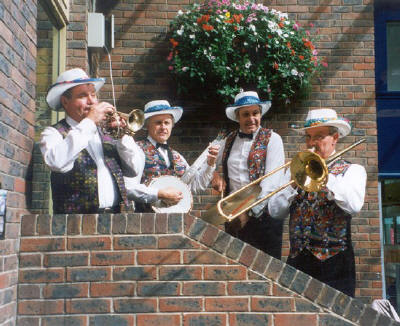 start out sunny, but a shower can come on in minutes. Most bands play with a PA system, which can take half an hour to dismantle, by which time it could be destroyed by the rain. So, unless it is a Trad. band playing without amplification, always set up the band under cover. A Trad or Dixieland; Ragtime; New Orleans quartet can usually perform outdoors without amplification (due to the instrumental line-up). Although a Jazz Quartet can’t relocate quickly like a classical string quartet can, if you are providing shelter such as a gazebo or small marquee, a jazz quartet is quite a compact unit so easy to provide shelter for.

Use the drop down box at the top of the page to select the county where your venue is and see the musicians who are available to perform there.

Jazz covers a huge range of music and styles that have developed and split since the late 1800s to the present day. Jazz means something different to different people. Furthermore, to an extent there are regional variations in what is expected, so someone asking for a Jazz Band in your area may have a different style in mind to a person asking the same thing in another part of the country. So, when someone asks us for a 'Jazz Quartet’ we first have to discover what they have in their mind as 'Jazz'. That is why we let you listen to as many of our bands as possible on our web site, so that you can select the bands that play the style you like. (Go to 'Search' then select 'Jazz' from the first drop down box.) Because many of our bands cover a wide range of jazz and we are possibly limited in what we can let you hear by the recordings they happen to have made, it might be useful for you to read about the styles of jazz that our bands cover in our section on Jazz Repertoire. Here is some background to just a few of the styles that different jazz quartet can cover:

Swing is perhaps the most popular of jazz styles today, but it was a completely new style that occurred during the 1930s. At that time Big bands became popular, with the 13-piece band being common. Many jazz quartets play arrangements of swing era tunes suited to the smaller line-up. 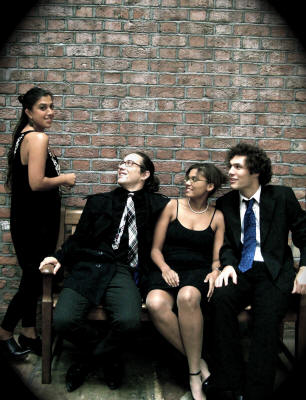 Bop was revolutionary at the time it appeared, though we are well accustomed to it now. It caused considerable con­troversy when the first recordings appeared in 1944. The bop style was, in fact, rooted in the big-band techniques of the previous decade. The major differences between bop and the swing style it supplanted concerned aspects of rhythm, harmony and melody.

Thelonious Monk's compositions provide the most impressive examples of bop harmonies supporting catchy themes. Many bop pianists used their right hand to imitate the driving melodic style of trumpet and saxophone, with varying degrees of success: the finest exponent of this manner of playing was Monk's protege, Bud Powell (1924-66).

After the experimental jam sessions in Harlem, Parker and Gillespie made their first be-bop recordings in 1945. During the late 19405, Parker and Gillespie were familiar figures at jazz nightclubs on 52nd Street, New York, principally the Spotlite, Onyx and Three Deuces. Cab Calloway, who had ejected Gillespie from his band in 1941 after a personality clash, simply described bop as 'Chinese music', even though Calloway had introduced Gillespie to the Afro-Cuban musical techniques that exerted such a strong influence on the bop style. The Congress of Racial Equality was founded in 1943, as the bop style was blossoming, and racial tensions in the United States had a significant influence on the socio-political attitudes of early bop musicians. Bop set itself up as a style worthy of respect and analytical attention.

In the same year, Club Eleven on Carnaby Street, London, began promoting the bop style in England. In 1949, Gillespie returned to France to attend the first jazz festival at the Salle Pleyel in Paris, where Charlie Parker, Kenny Clarke and the young Miles Davis also appeared. Jazz had made considerable progress in Europe since 1919, when the Original Dixieland Jazz Band made its controversial visit to London. As a result, British jazz remained regrettably insular during the 19408. Both Parker and Gillespie participated in the contest, defending the new be-bop movement. Part of the resistance to bop stemmed from the inescapable associa­tion between the idiom and hard drugs. Vaughan was also a fine (though sparing) scat singer and worked with leading bop musicians in the bands of Earl Hines and Billy Eckstine from 1943 to 1945.

Keyboard technique continued to develop. Tatum favoured complex harmonic substitutions that were the envy of bop musicians: Parker confessed to admiring his work, which affected many later pianists.

A development by a younger generation of performers, hard bop intensified bop's down-to-earth blues inflections and powerful rhythmic drive. As Blakey's collaboration from 1953 to 1955 with pianist Horace Silver (b. 1928) showed, hard bop derived much of its expressive power from bluesy elements imported from gospel music. Lee Morgan (1938—72), Blakey's trumpeter from 1958 to 1961 and 1964 to 1966 and a former member of Gillespie's big band, epitomized the intense, stylish vigour of the best of hard-bop playing. Both recordings were made on the Blue Note label, which did much to promote hard bop and soul jazz in this period.

Still viewed in some quarters today as an annihilation of universally accepted musical values, avant-garde jazz often appears to pose more artistic questions than it answers. In 1956, Mingus's quartet recorded the album Pithecanthropus Erectus, which broke new ground in its free ensemble improvisation and looked ahead to the reduced importance of conventional har¬monic progressions in later jazz. In many respects avant-garde jazz was typical of its era, mirroring developments in other areas of the arts. By the 1960s, when avant-garde techniques had reached their peak (or nadir, depending upon the critic's sympathies) in classical music, jazz no longer lagged behind experimental concert music in terms of either technical sophistication or artistic daring. Even the New Grove Dictionary of Jazz notes that free jazz is 'best defined by its negative features'.

Although avant-garde jazz was musically radical, its artistic spirit remained true to the ideals of earlier generations of black musicians. Jazz had, in effect, returned to the preoccupations of its early days.

The leading light of the early avant-garde was saxophonist Ornette Coleman, whose recording Free Jazz christened the incipient movement in 1960. Free Jazz combined a second quartet (not including piano), with Coleman's original ensemble to create an octet, the additional personnel com­prising trumpeter Freddie Hubbard, bass clarinettist Eric Dolphy, bassist Scott LaFaro and drummer Ed Blackwell. The avant-garde movement was branded an 'anti-jazz' clique by critics such as Leonard Feather, for whom bop remained the central style.

One of the most prolific and critically acclaimed composers in the free-jazz idiom has been saxophonist Anthony Braxton, who recorded an unaccompanied double album in 1968, entitled For Alto Saxophone. It was typical of several musicians' co-operatives set up in the 1960s to promote free jazz, a style that was destined to remain a minor­ity interest: similar groups were formed on the West Coast (Underground Musicians Artists Association, 1965), in New York (Jazz Composers' Orchestra Association, 1966), and in St Louis (Black Artists' Group, 1968). Chicago became the centre of the free-jazz movement, and the Art Ensemble of Chicago was established in 1969.

Eager to break away from earlier American styles, many European musicians adopted avant-garde techniques with alacrity. By the time these musicians were established in the 19708, the ECM record label had begun to define its own peculiarly European brand of free jazz, which blended folk music, jazz-rock and the avant-garde.

Extreme modernism is unpopular enough even in the classical concert hall, and in emulating this trend in the field of jazz many avant-garde musicians alienated themselves (sometimes deliberately and irrevocably) from a potential mass audience. In jazz, these tendencies burgeoned at an unfortunate moment, just as rock music threatened to steal away an entire generation of younger listeners.

So, you can see that for your birthday party, wedding reception or street party, there is plenty to choose from. So, as always listen to the music clips of each band, look at their repertoire list, read the description to decide which band is the right one to book through the Midsummer Music Agency.

Here are some interesting resources on the history and performance of Jazz:

HISTORY OF JAZZ FROM THE VIEWPOINT OF FIDDLE PLAYER
Origins of Jazz
JAZZ AND FOLK MUSIC.
Formal notation of jazz
The origins of spirituals in jazz
Printed music versus tradition in jazz
Rhythmic Elements of Jazz
Emphasis in Jazz Rhythms
Emotions and Jazz Rhythms
Sections of a Jazz Band
Jazz Pollyrhythm
The Big Jazz Band - the Jazz Orchestra
The Standardised Jazz Orchestra
Commercial Jazz Band Orchestration
The Psychology of Jazz Band Syncopation
Tap Dancing & the Jazz Band
The Jazz Band & Indo Jazz Fusion
Blues and Transforming Jazz into an Art Form
The Jazz Band in the American Psych