Party Bands - for your Event

To see available Party Bands
select your County or Location

BacklnBlack - AC/DC: Their black covered album, where"Back In Black"and"Have A Drink On Me" paid tribute to Scott (the original vocalist, Bon Scott, who died in February 1980), but elsewhere his absence was scarcely noticed, as Johnson's dissonant wail clicked perfectly into the mix.

The ribald sensuality of "Let Me Put My Love..." —"Let me cut your cake with my knife"—also signals that Scott's demise hasn't destroyed the band, while their sign-off, "Rock And Roll Ain't Noise Pollution," challenges the world.

AC/DC finally got their break in the USA with Back In Black, achieving a million sales annually over the next five years. WOW! 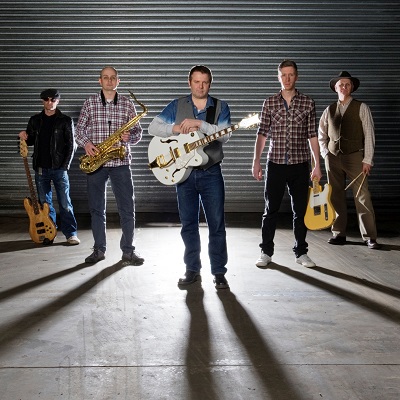 Earlier,  AC/DC had gained fame in Europe but was being ignored in the USA. The group was fiercely ambitious, and brought in singer Brian Johnson on the recommendation of their producer Robert Lange.

Slippery - When Wet - BonJovi: What an album! Critics have had a downer on Bon Jovi, attributing the success of Slippery When Wet to the band's slushy sentimentality and lead singer Jon Bon Jovi's boyish looks rather than to the band's musical tallent. Nevertheless, Bon Jovi did the unthinkable with this album—they made heavy metal into a pop genre that women could relate to. They also hit the U.S. chartes with a vengence.

Jon's musical abilities in the high registers was decisive, but so was backing and infectious melodies. Moreover, Bon Jovi kept the lyrics down to earth, writing about everyday things that anyone could relate to—romantic turmoil ("You Give Love A Bad Name"—a U.S.A. No, 1), the world of everyday work ("Livin' On A Prayer" —another No. 1), and virginity ("Never Say Goodbye"}.

Not that appealing to the ladies harmed the traditional fan base. The band tried out their songs by playing demo-versions to kids in a pizza parlor across the street from their studios to be sure that their songs had a gritty sincerity. Richie Sambora was the accompliched lead guitarist on his spectacular solos. For all the girl appeal, lines like "I've seen a million faces and I've rocked them all" ("Wanted Dead Or Alive") showed that Jon knew how to appeal to the basest of male rock-fans' desires.

Bad - Michael Jackson: This was number 2 album in an ascending crescendo of musical success. When he attempt to top his biggest selling album of all time, Thriller, it is a credit to Jackson and producer Quincy Jones that the sequel Bad was bigger, bolder, and "badder" than Thriller in just about every sense and was able to stand in its own right, not just a sequel to the earlier success.

The album explodes in dizzying dance floor fashion with two songs that rank among Jackson's best— the joyful and sexy come-on "The Way You Make Me Feel." Then "Dirty Diana" is raunchy and forced, a song to rival Prince. "Smooth Criminal" is a complete oddball, delivered with style and the usual Jackson energy. But Jackson has rarely sounded more convincing than on the beautiful ballad "I Just Can't Stop Loving You," whilst "Leave Me Alone" offers a glimpse at the paranoia that is bedeviling this supersta; an cry for help that the world would hear repeated many times.It sold four million copies by the end of the year, which was pretty good for being Bad