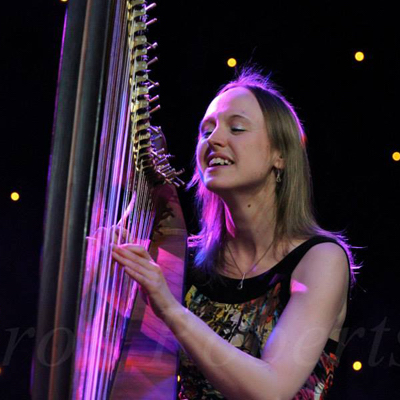 Harriet, although classically trained, now specialises in the Celtic harp after joining an Irish band in her gap year. She is a full-time harpist, playing extensively throughout Britain and abroad. She was the 'Harper of All Britain' in 2000 and again in 2002.

She has various recordings to her credit. Her first solo album 'Jumping Ahead' (of Irish and Scottish music with backing from a variety of world music instruments) was released in 2002.

She has given many harp recitals around the world, including concerts at the 'Irish Spirits' festival in Germany in 1999, 2000 and October 2002 and solo recitals touring in Florida in March 2002 and 2003. She has also toured with a show in the Boston area, given concerts in Amsterdam, France and Belgium .

Harriet is fast gaining a reputation both in the UK and abroad as an extremely talented and expressive harper. Her aim is to show a new approach to harp-playing, using the Celtic harp as a strong melody instrument.

Harriet can offer unforgettable and beautiful Celtic harp music to accompany any event.