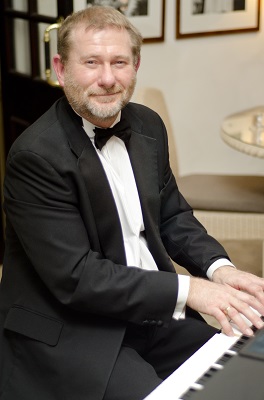 Simon began playing the piano at the age of four, having both perfect pitch and the ability, within a short space of time, to immediately play anything that he heard. Training as a ‘classical’ pianist followed, he also studied the violoncello and spent several years as a chorister whilst at grammar school.

Over twenty years musically directing and orchestrating scores for a wide range of productions, from tried and tested favourites such as ‘Blood Brothers’, ‘The Wizard of Oz’, ‘Joseph and the Amazing Technicolor Dreamcoat’ and ‘West Side Story’, to those with an original concept; ‘Patsy Cline – A Musical Tribute’, ‘She Knows You Know’, ‘Stand By Your Man’ and a whole repertoire of pantomimes! Escapades abroad include an extensive German tour of ‘Oklahoma!’ and ‘Elvis the Legend’ in Sweden, with an American cast and a mixed Swedish/English orchestra. Over the years, in musicals, concerts, television broadcasts and cabaret, Simon has had the pleasure of working with some of our most celebrated television and variety performers. He has also worked for several contracts aboard the QE2 (1997 and 1999) and Saga Rose (2002 – 2003) cruise liners as Pianist and Musical Director, respectively.

He holds both BA(Hons) and MA degrees in Music, a PhD in Composition from the University of Sussex, and a Performer's Diploma from Trinity College, London.

Simon’s personality might best be described as confident and gregarious; a large percentage of his career having revolved around the management and rehearsal of actors, singers and musicians, also lecturing and tutoring students in a college of music. His performance skills at the piano are still very important and unique to him and, due to both his natural facility and so much formal training and experience, he is comfortable with diverse styles of music from the popular end of the spectrum right across the board to a more ‘classical’ repertoire. As well as playing the piano, he has worked with an armoury of hi-tech electronic equipment and keyboards over the years. His lecturing has focused on the specialist areas of musical development, arranging and composing for the moving image.

A vast repertoire of popular music and standards. Particularly suited to a more mature and discerning clientele.

NOTE: A well maintained grand piano or suitable digital instrument at the venue is a prerequisite, as he does not provide his own digital piano.