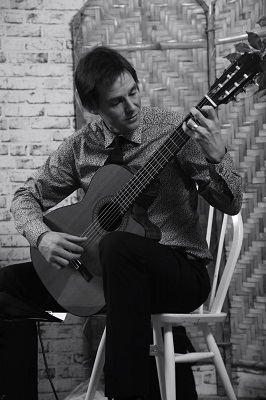 Scott - a classical guitarist for relaxing and sophisticated solo guitar music. As a traditional Spanish guitarist, he creates lyrical background music perfect for weddings, restaurants, art galleries and laid-back functions. The sound of this romantic guitar perfectly complements summer parties and is the ideal accompaniment to an al fresco meal. There is little else that sets a summery scene than the sound of a Spanish guitarist playing, and this classical guitarist brings the romance of Seville to any event. Playing solo guitar, his act can be tailored to fit into even small-scale venues such as bistros and art galleries and comes fully self-contained, only requiring access to power. Help your wedding guests’ first glass of champagne go down by having our romantic guitarist playing background music as they arrive. The tone and timbre of the instrument is the perfect complement to conversation, without being intrusive or distant. Whether in a small pub or a large church, the sound can be made to suit the size and number of people.

Scott will also provide stage shows of his repertoire. This solo guitar show is the ideal diversion from sophisticated events such as exhibition openings at art galleries, charity fundraisers and local festivals. The romantic guitar goes down well with audiences of all ages. Well-suited to any season,Scott plays fireside jazz standards like The Way You Look Tonight as well as a dedicated Christmas repertoire, including carols, traditional songs such as the First Noel and the Celtic classic Auld Lang Syne.

Scott's repertoire is not exclusively classical. Alongside the classical favourites played by artists such as Craig Ogden and Julian Bream, our solo guitarist plays clever arrangements of Lennon and McCartney tunes and songwriters like Sting, Seal and the Rolling Stones. The repertoire listed here is only part of his very extensive list.