Harps in Wales for hire

Amanda is one of the most exciting young harpists in Wales today. Her musicianship combined with a strong technique and a lively character puts her in the front line of contemporary musicians. The Harp will add a touch of class to your event in Wales. Amanda has appeared on British, American and Japanese television and has captivated audiences with her harp recitals and her own unique style of jazz and cocktail music. Engagements have included playing for HRH Prince of Wales and Reverend Desmond Tutu.

Audrey is in great demand as a soloist for corporate entertaining and weddings. She is the first call harpist at Coombe Abbey, Coventry, The Lygon Arms, Broadway and other prestigious venues throughout the Midlands. A harpist to create a perfect atmosphere for your Wales wedding or anniversary. Audrey has worked with all the major symphony orchestras including six years as Principal Harp with the B.B.C. and Ulster Orchestras. She is also the Principal Harp with the City of Birmingham Touring Opera and The Royal Shakespeare Company.

Harriet was classically trained, and has given many solo harp recitals around the world, for example at the ‘Irish Soirits’ festival in Germany; in Florida, Boston and New York in 2002 & 2003. She has also given concerts in Amsterdam, France and Belgium. She was the ‘Harper of All Britain’ in 2000 and has won it again in 2002. She plays both Concert or Celtic Harp. Wales is within this harpist’s local performance area. 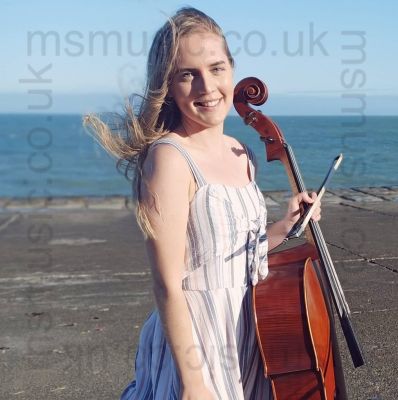 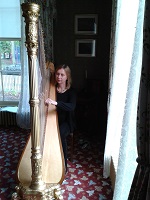 Anna is one of the most versatile and adaptable harpists in the UK. After gaining a degree in music in her native New Zealand, she was the resident harpist in the Hotel Intercontinental in Bahrain. Completing her MA in music at the University of Wales, she then returned to NZ for several years to work as Principal Harpist with the New Zealand Symphony Orchestra. She was also harpist in residence for New Zealand Government House where she played for receptions and guests including the Emir of B ...show more

Meinir graduated from University College, Cardiff. Since 1972 she has held the post of Principal Harp with the Orchestra of the Welsh National Opera, touring extensively and taking part in almost all of their widely acclaimed recordings. Wales is within this harpist’s local performance area. Most recently, she appeared on the best-selling Charlotte Church CD, ‘Voice of an Angel’, which featured on four tracks for voice and solo harp. Meinir has played with many other famous names, including Bryn Terfel, Luciano Pavarotti, Dennis O' Neil, Kiri Te K ...show more

Former Royal Harpist and alternative live looping artist, Jemima is an award winning harpist with a difference. An ideal harpist for a wedding or dinner in Wales. Often described by her clients as being the highlight of their day and exceeding all expectations, Jemima uses an electro- acoustic harp alongside loop and pedal fx technology to create quirky, unique covers that will have your guests talking and playing "name that tune" all day! Her renditions of songs such as Game of Thrones, Sweet Child O' Mine and Gangsta’s Paradise are fast becom ...show more

Maxine has a busy free-lance career with some of the UK's leading Symphony, Opera and Ballet Orchestras including the Halle, Opera North, National Symphony Orchestra, English National Ballet, City Ballet of London and Moscow City Ballet. The Harp will add a touch of class to your event in Wales. She also pursues a solo career performing Concertos and Recitals. She has entertained Royalty, and worked with a range of celebrities as diverse as Tenor Russell Watson and Rap Star Kanye West. She has also played aboard cruise ships, at major sports events and ...show more

During the last few years she has played at various events ranging from a memorial ceremony at Westminster Abbey to lavish events at the Hilton Hotel in Cardiff. A harpist to create a perfect atmosphere for your Wales wedding or anniversary.

Rebecca has been performing at weddings for over five years and has never seen two weddings the same. Wales is within this harpist’s local performance area. She has played at everything from a sim ...show more

The Harp pages lists musicians who are available to perform in Wales. They are particularly appropriate for the wedding breakfasts, dinners and evening entertainment. To find out more about them, read on:

The Celts had fled westwards under sustained invasions from Romans, Vikings and Anglo-Saxons. The Anglo Saxon English kings had not ruled Wales, and at the Norman invasion was a collection of small kingdoms. It took the Normans some 200 years to gain control of the whole of Wales. The 8 royal castles like Harlech (left) kept a lid on rebellion in the meantime. The last major Welsh uprising was by Owain Glyndwr between 1400 and 1408